Players can read, view and contribute descriptions of objects, other players, non-player characters, and actions performed in the virtual world, as well as the “real” world. Players typically interact with each other by utilizing strings that resemble a natural language.

While traditional MUDs typically implement RPGs set in distinct fantasy worlds populated by fictional races and monsters, with players choosing classes in order to gain specific skills or powers, Twitter allows every player to project their own fantasy and define their own game.

The flexible nature of Twitter makes it difficult for any singular definition of “the game” to become canonical. Conflict between players with different interpretations of Twitter is a key feature of Twitter itself. Indeed, one of the most popular games is “hey, fuck that guy”.

Unsurprisingly, few players put much thought into precisely defining the game that they are playing. Most players “pick it up” organically as they go along, inheriting the unwritten rules and norms of their peers via imitation and (limited) experimentation.

The key feature of (public) Twitter is that any player can interact with any other player. Any player can reply to any other player’s tweets, or retweet it, or quote-tweet it. This bypasses traditional limitations of both “real life” as well as older web mediums like “blogs”.

Twitter is also searchable, and allows tweets to be “threaded” in chains.

This allows skilled players to build incredibly complex tapestries of hypertext, consisting of thousands of tweets.

Why would such prolific players choose Twitter as a medium, rather than “websites” or “books”, which appear to be better suited to large volumes of content?

Because Twitter allows any player to interact with any other player’s tweets.

Most casual players do not appear to have caught on to the true potential utility of Twitter, or perhaps they are indifferent to it.

A web of tweets is a living entity that allows players to meet, interact and engage with 1000s of others at the level of individual thoughts.

Properly constructed, a web of tweets allows you to:

We have not yet even begun talking about relationships. Players can build relationships with other players over time and shared interactions. Through cooperation, multiple players can share and merge webs with one another, helping each other find and share desired information

Players observed to be “good” and “fun” have even been known to invite each other to meetups, offer each other jobs, become “friends” outside of Twitter. Twitter is a game with extremely real stakes and consequences, both good and bad.

You are not limited to a single identity or account on Twitter. A single individual can play as many different players simultaneously. You can invent entirely different identities and have radically different experiences with each.

Any player can significantly improve their experience of Twitter by examining their own usage and evaluating it against their own desires and goals.

At any moment, any player can completely change their experience of Twitter by deciding to play it differently.

With a little introspection, Twitter can be a tool for self-inquiry, making friends, testing ideas, messing around, finding information, practicing speech, and pretty much anything you like.

Honestly I’m still not done geeking out about how great Twitter is. Any tweet from any thread can be reused in any other thread, do you realise how wild that is??? It allows you to create your own cinematic universe

Twitter allows me to do ALL OF THOSE THINGS SIMULTANEOUSLY

This is a thread about threading. ...and threading FAQ 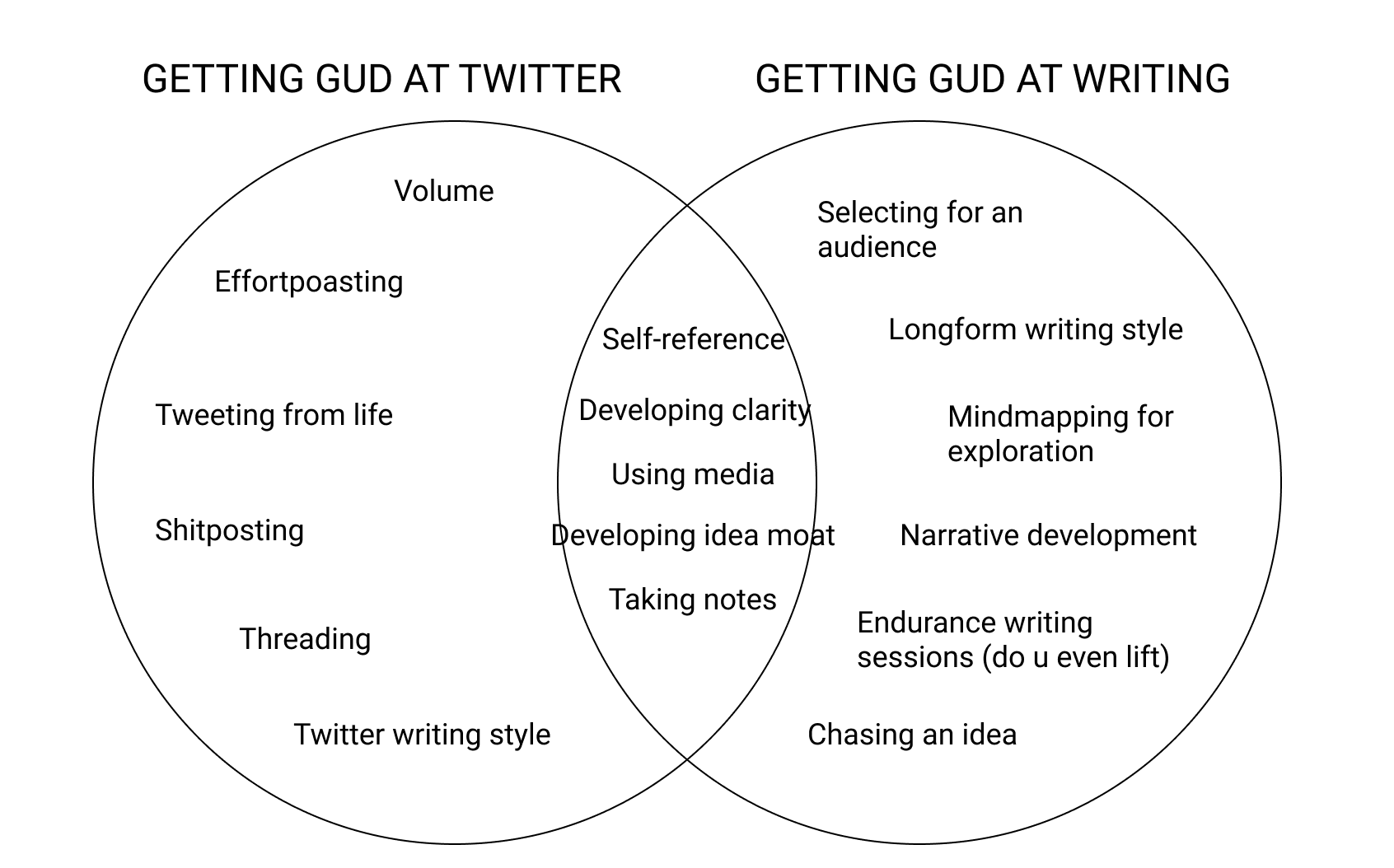 A thread on Mindcity & assembling it...

Here's a short twitter strategy guide by another one of my friends.

If you're still not convinced you should be playing twitter, here's a list of more reason I think its great.